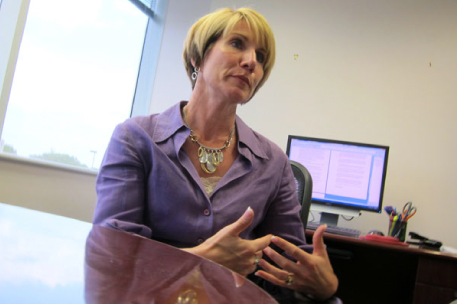 Profile: NJ’s Biggest Booster of the Common Core Goes Back to School

Profile: NJ's Biggest Booster of the Common Core Goes Back to School

Why she matters: In her role as assistant state education commissioner, Severns was the energetic public face of New Jersey's entrance into the new Common Core State Standards in language arts and math.  After two years in the department, she now returns to Mount Olive schools to lead the district into its own new era of education.

Lengthy resume: Severns has held practically every job in New Jersey public education -- from aide, to special education teacher, to principal, to superintendent in Great Meadows. She was the state's Principal of the Year at Mount Olive Middle School when the state tapped her on loan from the district, and she moved up quickly to be the education department's chief academic officer.

Loan system: The state and district entered into a two-year agreement in which remained a district employee, while the state paid her costs. "It was a beautiful circumstance. I could retain my seniority, my salary, my administrative contract," she said.

A lot of driving: In addition to 90-minute commute each way from her Hope Township home, she made countless visits to schools and other events to promote and offer guidance in how to adapt teaching to the new standards .

"I put 39,000 miles on my car -- in one year," she said. "My goal and my philosophy of life is showing up, and ... if I could dislodge them from the place they were angry that it was too much and too fast, I could help them. That was the really important work."

Actually, she did count: Severns said that in her role for the state she spoke in the last two years to 29,800 people at 165 different venues , with audiences ranging from 20 to a whopping 2,100 people at a Red Bank conference.

On stage: Maybe as much as anything else, Severns was known for her high-energy pitch to educators, literally bounding about a room to try to instill some of her own passion into the audience.

"When you communicate with a genuine sense of passion, there is no pretense, no need to try to deliver someone else's words. I learned the power of voice and speaking with passion, and being really present with people and looking in their eyes. I want you to get it, I want you to feel something."

Common goals: "We all want the same for kids. From highest performing schools to the most struggling, all want good things for kids. They are just not always sure how to do it."

Is the state ready? There has been lots of debate over whether the state's schools are ready for full implementation of the Common Core standards – and especially the related tests.

"We are farther than we were. Everyone is on a journey, and all started from different places. And wherever they were, they have started to move forward and are consistently further than they ever were."

Lessons learned: "There have been a lot of misunderstandings. What I've learned is a lot of people don't understand what goes on (in the department), and there are forces and factors that can hinder your attention."

Back to school: She said she misses the work she did for the state over the past two years: "You're in the center of things, the mission control."

But she's ready to get back to school. Her new role in Mount Olive schools will be as a supervisor and coach for teachers and principals.

"So important to stay close to teachers and kids," she said. That is where it is really messy and that keeps you honest."

"It's exciting to be back," she added. "People are familiar, and the work is more informed by the experiences I have had over the last two years. I get that in a way I have never had before."

Family: Her husband, Scott, is a cabinet maker. Her son, a college student, aspires to be a writer. Her daughter, who plans to follow in her mother's footsteps with a career in education, is starting her student teaching this fall.